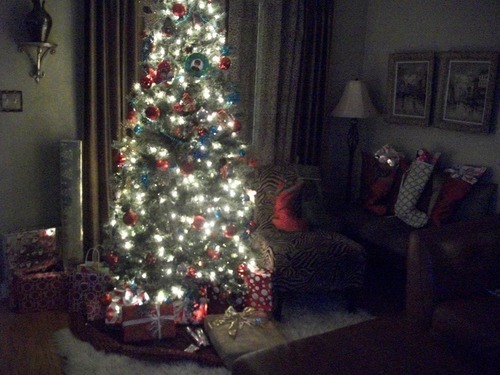 It has been one of those days–the kind where I continually return to my coffee cup only to find it empty. In the weariness and busyness of the holiday season, I’ve consumed cup after cup without even realizing it. How is it that I have no memory of drinking and refilling, drinking and refilling, and drinking and refilling again? But sometimes I’m thoughtless like that. The disappearing coffee act makes me wonder what else I’ve done thoughtlessly today and other days and throughout the Christmas rev-up. Christmas is tomorrow! Tomorrow! The day marked off on our calendars to commemorate the birth of Jesus the Christ. And yet I’m mindlessly going about the business of baking and cooking, wrapping gifts and addressing (late!) Christmas cards. And then I’m filled with wonder again as I realize God is never thoughtless toward me. I’m am never out of his thoughts. He never mindlessly goes about his business. Indeed he “never slumbers or sleeps.” And however often I feel like the contrary is true–that he has forgotten me, that he isn’t working for my good, that he doesn’t care about or even notice the details of my life–the fact that we celebrate Christmas makes a mockery of my capricious feelings.

I’m no Jewish studies expert, so I don’t know the spiritual state of the Jewish people on that first Christmas. But it had been years–over 400 years–since they had heard anything from their God. And as the years turned into centuries and the promise of having their own land and sovereign nation faded away, surely, many had lost hope. I can imagine that even the religiously zealous began to despair of God’s keeping his promise of sending the Messiah to rescue them and restore their kingdom. They must have felt that he had permanently withdrawn his presence, that he had forsaken them, thoughtlessly forgotten them. Maybe they thought they would be in bondage forever.

But then! There was a whisper of angelic visitations, a stir about the birth of a baby boy somewhere in Bethlehem, a shepherd’s tale of an angelic host bringing a message of peace from Heaven, and rumors of wise men from a far place traveling to David’s city. What did the Jewish people make of all this? Did they consider that God was intervening in human history once again? But that this time, rather than mediating his messages through human agents of prophets, priests and kings or through angels and visions and miracles, he was going to intervene in a more powerful and decided way. This time he would fix the sin problem and make it possible for the Spirit of God to dwell again with us. But this time the blessing of his presence would extend to all people, offering God’s goodwill and peace to every nation of the earth. This time God spoke directly to us in an amazing and mysterious way. Immanuel! God with us. God one of us. The Savior of the world contained in an infant’s body–dependent on his mother for nourishment and protection, having to learn to walk, to talk, to live in a sin-cursed world and to suffer as we do in a fully human body subject to exhaustion, disease and of course to death. And to do it all and remain completely separate from sin, not violating God’s standard of perfection in any way.

It is this intervention that brings us the much sung about “peace on earth and goodwill toward men.” Even in his anger toward the human race because of our continual rejection of his sovereignty over our lives, God loved us. And he took the necessary steps to remove that wrath and to make us what we should be. He sent Jesus to endure for us what we could never endure ourselves–the punishment of a completely holy, completely powerful God. The wonderful truth about Christmas is that for those who have turned to Jesus and cling only to him as their Savior from God’s wrath against them for their sin, is not just that we’ve “made peace” with God and that he has agreed to tolerate us and not destroy us. But it’s the much more incredible truth that God loves us and is pleased with us. Jesus secured his goodwill toward us. We have nothing to fear. God loves us as children–just as he loves his own perfect Son. This is true peace: to be loved by the sovereign God in heaven, to know that my crimes are forgiven, to know that I can never be cut off from that love and to know that God directly orchestrates the events in my life to bring about his desired ends–good ends–“plans for peace and not evil…to give me a future and a hope.” (Jeremiah 29:11)

And if I am thoughtless, God remains thoughtful. My future is secure, and in this assurance of God’s goodwill toward me, I can move forward in peace and really enjoy Christmas. Every gift purchased, every cookie baked, every carol sung, and every greeting given this season is a faint echo of that first and best gift given on Christmas day: Jesus–the proof of God’s goodwill.

Scripture Claims to Make Us Happy

Jesus: The Paradigm for all our Hospitality